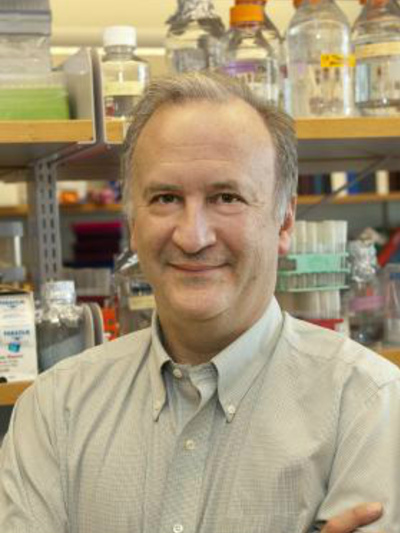 Dr. Wharton has a joint appointment in the Department of Molecular Virology, Immunology, and Medical Genetics, OSU College of Medicine.

Control of mRNA translation and stability plays a key role in early development of many organisms and is an essential aspect of gene regulation in germ cells of animals from nematodes to humans.  We use fruit flies as a model system to study such regulation, focusing in particular on the translational repressor Nanos (Nos).

Repression of hb and bcd mRNA

The best understood role for Nos in Drosophila is in establishing the embryonic body plan; abdominal segmentation requires Nos-dependent repression of maternal hb mRNA in the posterior of the syncy tial cleavge stage embryo.  Nos is incorporated into two repressor complexes on the 3’-UTR of hb mRNA, formation of which is nucleated by the sequence-specific binding of Pumilio (Pum) to conserved 32 nt Nanos Response Elements (NREs).  As part of a lon 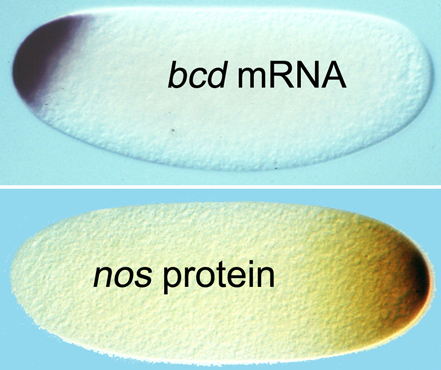 g-standing collaboration with Dr. Aneel Aggarw al’s laboratory at Mount Sinai School of Medicine (NY) to study assembly of these complexes, we have shown by a variety of biophysical and molecular methods that two molecules of Pum bind each of the hb NREs (Gupta et al.).

We are also investigating potential regulation of bicoid (bcd) mRNA by Pum and Nos. Within the 3’-UTR of bcd mRNA is a conserved NRE, which mediates repression if Nos accumulates ectopically in the embryonic anterior (Wharton & Struhl, 1991).  However, in wild type embryos biologically relevant levels of Nos are generated only at the posterior pole of the early embryo, and thus the role of the bcd NRE has been unclear.  We are currently testing whether the bcd NRE mediates regulation in the absence of ectopic Nos.

Repression of maternal Cyclin B mRNA in the primordial germ cells

The evolutionarily conserved role of Nos is in the germ line.  The first manifestation of such a role is in the primordial germ cells (PGCs) shortly after they form at the posterior pole of th e  embryo:  Nos and Pum collaborate to repress translation of maternal CycB mRNA and thereby block proliferation.  At this stage of early embryonic development, Nos is restricted to the PGCs; however ectopic Nos is insufficient to repress CycB, pointing to the existence of an germ line-limited co-repressor (Kadyrova et al.).   Current experiments focus on identifying this co-repressor, an important step in defining the mechanism of Nos action in the germ line.

We have performed a genetic screen to identify factors involved in generating Nos in vivo.   The first mutation we characterized is a dominant negative allele of Hsp90 (Song et al.).  Normal levels of Hsp90 chaperone activity are necessary for the coupled localization and translational activation of nos mRNA that gives rise to Nos protein in the pole plasm of the early embryo.   Further experiments suggested that one of the key Hsp90 client proteins for this process is the LKB1 kinase; however, Hsp90 has many other clients and thus its role in nos mRNA localization may be somewhat indirect. 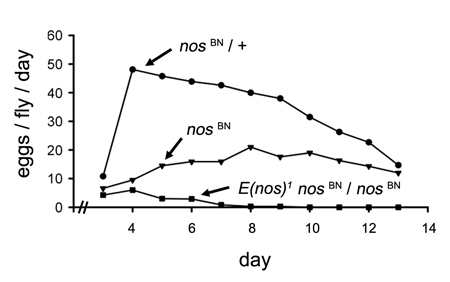 Properties of the second mutation we characterized shed light on an evolutionarily conserved role of Nos--  the maintenance of germ line stem cells (GSCs).  In combination with a nos hypomor 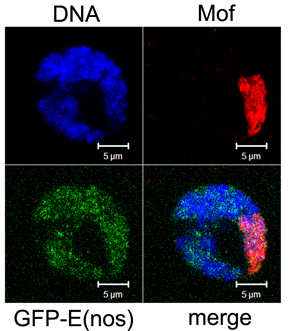 ph, mutations in Enhancer of nos [E(nos)] cause highly penetrant age-dependent loss of fertility and depletion of germ line cells from the ovary (Yu et al.).  In germ line clones, Nos does not accumulate in homozygous E(nos) mutant GSCs which therefore lose the capacity for self-renewal.  Nos orthologs in other organisms appear to play similar roles in  germ line stem cell maintenance.

Together with its partner Pum, Nos plays a key role in GSCs, where it is thought to repress the translation of differentiation-promoting mRNAs.  Despite the biological significance of this function of Nos, no relevant mRNA targets have been identified to date.  We are currently developing methods to identify Nos-regulated mRNAs in vivo, with a particular focus on identifying those involved in GSC maintenance.